Kuida is One Year Old! First Export to the US market, UK Product Approval, and 300+ Points of Sale in Colombia

TORONTO, Oct. 25, 2019 /PRNewswire/ - Khiron Life Sciences Corp. ("Khiron" or the "Company") (TSXV: KHRN), (OTCQB: KHRNF), (Frankfurt: A2JMZC), a vertically integrated cannabis leader with core operations in Latin America, announced today that, after a successful first year in the Colombian market, the Company adds another significant milestone: its first import of Kuida cosmetic products into the United States. With this first shipment complete, Kuida has become the first Colombian brand to introduce legal CBD products in the US market. Launched initially in October 2018, the Kuida brand includes a pioneering line of CBD skincare, which were the first such products in Colombia to include CBD as an ingredient. Since then, the Company has built on its trail-blazing launch with a series of milestone achievements. Highlights include:

Expanded Portfolio and Strong Marketing Campaign for the New Year

Elsa Navarro, Skin Unit Director of Khiron Life Sciences, commented, "When Kuida launched last year, it became the first brand of its kind in Colombia to bring the benefits of CBD to a comprehensive line of skin and personal care products. But our leadership in the market goes beyond that – we were also the first licence holder in Colombia to educate on the use of CBD on skin through mass media, billboards, TV commercials and pop-up stores. We have built a diverse customer base, established a robust distribution network, and set the standard for sophisticated, safe CBD products in the Latin American market. Looking forward, we expect another exciting, successful year ahead as we introduce our brand to the US and European markets."

Khiron Life Sciences Corp. is positioned to be the dominant integrated cannabis company in Latin America. Khiron has core operations in Latin America and is fully licensed in Colombia for the cultivation, production, domestic distribution, and international export of both tetrahydrocannabinol (THC) and cannabidiol (CBD) medical cannabis. The company delivers best in class regulatory compliance, has the first approved set of CBD cosmetic products on shelf in Colombia, and is currently facilitating testing to meet and surpass all license requirements for commercial cannabis derived products.

With a focused regional strategy and patient oriented approach, the Company combines global scientific expertise, agricultural advantages, branded product market entrance experience and education to drive prescription and brand loyalty to address priority medical conditions such as chronic pain, epilepsy, depression and anxiety in the Latin American market of over 620 million people. The Company is led by Co-founder and Chief Executive Officer, Alvaro Torres, together with an experienced executive team, and a knowledgeable Board of Directors that includes former President of Mexico, Vicente Fox.

Neither the TSXV nor its Regulation Services Provider (as that term is defined in the policies of the TSXV) accepts responsibility for the adequacy or accuracy of this press release.

Further information in respect of the Company can be found at www.khiron.ca. 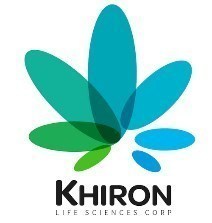